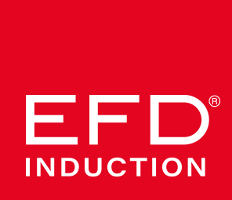 The roots of EFD Induction go back to the launch in 1950 of a universal induction hardening machine by the German company, Induktionserwärmung Fritz Düsseldorf GmbH (FDF).

While FDF was expanding in the 1970s, an induction revolution was taking place in Norway, where engineers had figured out how to transistorize frequency converters for induction heating.

In 1981 three of those engineers founded ELVA Induksjon a.s. In 1983 they unveiled the Minac range of mobile converters. Workpieces no longer had to be brought at great cost to a stationary induction heater—the heater could now go to the piece.

In 1991 the managing directors of FDF and ELVA met by chance. They talked… and speculated. FDF was strong in stationary induction hardening machines. ELVA was the agile innovator with a track record in finding new applications for induction heating. What if the two companies got together?

In January 1996 FDF and ELVA merged to create EFD Induction. And the rest is, as they say, history.

Today, EFD Induction is Europe's largest supplier of induction solutions for industry (we're number two worldwide, but we aim to change that!). If you'd like to know more about us, our products, and how we can help boost your productivity, just get in touch.